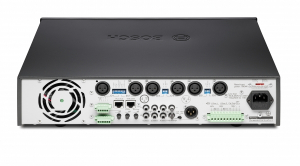 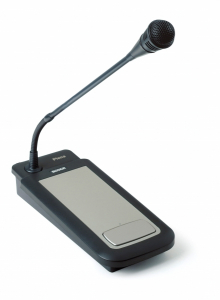 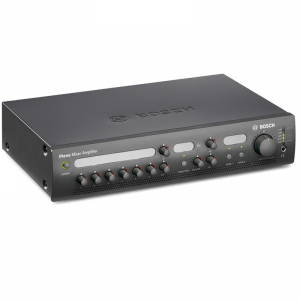 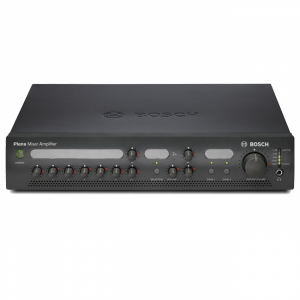 The Bosch Plena PA mixer amplifiers is a high performance, professional public address units with state of the art features. They are easy to use, taking the complexity away from the user and putting it where it belongs, inside the equipment. Bosch PA amplifier will provide you a crisp clear page or great sounding music. This PA amplifier is also affordable, without sacrificing features such as ducking, priority and flexibility.

Bosch PLE2MA240 Microphone and line inputs can be switched between microphone level and line level sensitivity. The inputs are balanced but can be used unbalanced. Phantom power can be switched on to provide power to condenser microphones. Input channels 1 and 2 can take priority over all other microphone and music inputs: Input 1 can be activated by contact closure on the PTT (push to talk). A 2-tone chime can be configured to precede an announcement. Input 2 can be switched automatically if a signal is fed to the input i.e. if someone speaks into the microphone

When one or both inputs are configured to have priority, the amount of attenuation (reduction) of the cinch inputs, can be set between 2 dB (little attenuation) or - dB (mute). This provides a talk-over or voice-over function. Input channels 1 and 2 also feature selectable speech filters to enhance the clarity of announcements.

Separate music inputs are available with their own input selector and volume control. The user can choose a music source like a CD player or radio (like the PLN-DVDT), and set the level of music. You can set the desired sound for the music source separate from the mic/line inputs. So if the music needs boosted low frequencies, this does not lead to muddy sounding voices from the microphones. The Bosch is a truly unique feature in its class.

More unique features are available such as detachable labels where the user can write the names for inputs, music sources and zones. These labels can then be mounted on the front, protected by the clear window. Another useful feature is to indicate preferred settings on the front panel by inserting colored pins at the pre-set levels of all knobs. You can then instruct a user to set all the controls to the silver pins to configure the system for their particular use. A second user can set all controls to the red pins for their configuration.

The unique tone controls provide separate control for mic/line inputs and music inputs so that the voice on the microphones can be specifically optimized for excellent speech or singing. Correspondingly, the tone controls for background music provide the most appropriate music reproduction. In addition, the tone controls are not standard bass and treble controls. Our experience has led us to develop a tone control that can be used as a traditional tone control with high and low control, but has a powerful contour that addresses the problems found in real situations.

The tone control for the music inputs boosts deep bass first without making the sound boomy, and cuts rumble without loosing warmth in the low frequencies. In the high frequencies the tone control is similar to the microphone inputs, with slightly different frequencies to suit music reproduction.

For easy integration with another PA system or a telephone paging system, a telephone / 100 V emergency input with VOX activation is provided. It has its own preset volume control and overrides all other inputs, including call station and inputs 1 and 2. The unit also has a line output to add amplifiers for larger systems, with more output power, this output can be switched to music only so that for instance music on hold can be provided for the telephone system. Insert (loop through) input and output connections enable external sound processing equipment, such as an equalizer or the Plena feedback suppressor, to be connected between the preamplifier and the power amplifier stages.

These Plena mixer amplifiers come in 120 and 240 Watts output power. This power is directly available on 100 Volt constant voltage connections and on a low impedance connection for an 8 ohm load. Moreover, the amplifiers have a separate 100 V call-only output channel for addressing areas where only priority announcements are required. The call-only output can also be used for 3-wire remote, volume control override.

An LED VU meter monitors the master output. A headphone socket, below the VU meter, provides the mixer output before zone selection so that it is possible to listen to the output before the signal is sent to the zone. For total reliability and ease of use, a limiter is integrated into the output stage to restrict output if the user applies too much signal.