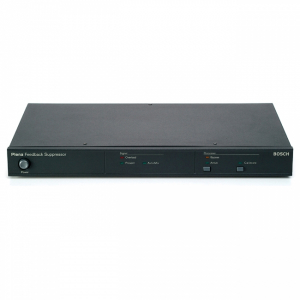 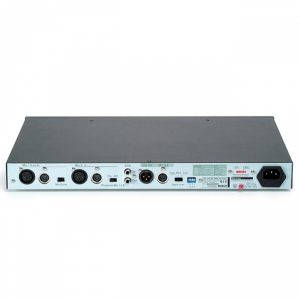 By adding masked (inaudible) noise to the output signal or by shifting the frequency of the output signal by five hertz, the Plena feedback suppressor is able to detect the reverb component of the signal and remove it before feedback occurs. This leaves the original signal in contact.

The Plena Feedback Suppressor uses a powerful DSP with a revolutionary patented algorithm to suppress acoustic feedback. It eliminates feedback by actively filtering the room reverb that leads to feedback out of the signal, using an echo cancellation and de-reverberation algorithm. By adding masked (inaudible) noise to the output signal (Music mode) or by just shifting the frequency of the output signal by 5 Hz (Speech mode) the Plena Feedback Suppressor is able to detect the reverb component of the signal and to remove it before feedback occurs, leaving the original signal intact.

In addition to its feedback suppression function, the Plena Feedback Suppressor also features a built-in automatic mixer for the two microphone inputs. In many situations two microphones are used to better capture the voice of a moving speaker, like on a rostrum, pulpit or a conference table, but often this increases the risk of acoustic feedback. The automatic mixer of the Plena Feedback Suppressor, however, automatically reduces the gain of the microphone with the lowest signal input and increases the gain of the microphone with the highest signal input. This way it 'tracks' the moving speaker for optimum speech intelligibility, and the maximum feedback margin is maintained by keeping the summed gain constant. Even if the feedback processor is switched to bypass this automatic mixer is still operating.