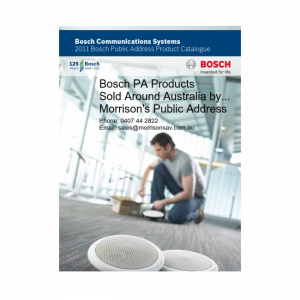 Why is high impedance (100V) any different from low ohm (Hi-Fi or pro audio) system?

For short cable runs low impedance PA is acceptable. However longer speaker cable runs from a conventional power amplifier to a low ohm speaker (eg. Hi-Fi) results in a large degradation of audio quality due to resistive power loss in heat (I2R law). To reduce the loss from the cable length it is logical to use larger gauge cables (more copper). However, in many cases this is not a realistic or viable solution considering some cable runs can be 100m or more in length.

Power stations have a good idea to solve the I2R resistive power heat problem which can be applied to PA systems. When they run power over very long distances from power stations to houses, they minimise resistive power loss by running the power as high voltage and low current. To do this, they use a step-up transformer at the power station stepping it up (eg. 30,000V) and a step-down transformer at the end point (240V). This reduces power loss due to the I2R heating of the power cables.

In the same way as the power station, the amplifier also steps up the voltage to reduce the loss of the cable, and at the other end the 100V speaker contains a step down transformer to deliver the required voltage and power to the speaker. Thus the high impedance system can be run on a smaller, more cost effective cable, and have better audio quality over long cable runs.

How do I wire speakers for high impedance (100V) PA systems?

In Parallel. See the diagram below.

There are so many types of speakers. What type of speakers do I need?

There are no hard and fast rules for which speaker should be used in an application.
However, consideration should always be given to the following:

1. What is the PA system going to be used for, or in other words, what level of quality is actually required?
2. Do the speakers require weather protection? (IP rating)
3. What are the realistic mounting locations for speakers?

Why would I use Loudspeaker Taps?

Loudspeaker power ratings are defined in Watts. Many times not all of the loudspeaker's power is required to be
used to get to the required SPL. The taps allow you to effectively turn down the power of the speaker via the
transformer. This allows more loudspeakers to be used with a smaller amplifier, reducing cost.

How do I know what size of amplifier I require?

Simply add up the power of all the loudspeakers (taps) that you wish to run together from one amplifier.

Example: 8 speakers x 15W taps = 120W of amplification This is the absolute minimum power you will require.

Why would a PA require more than one zone?

Many PA installations have different areas, with different requirements.

Pub with a Bistro

In this example there are 2 reasons:

Both areas may like to have the same background music or source, but at different volume levels.
The patrons at the bar do not want to be disturbed by the order numbers called from the paging microphone in the Bistro

A Bosch Plena 2 zone mixer amplifier or alternatively a 2 zone pre-amplifier and power amplifier would be perfect solutions for this application.

What wire does the Loop Amplifier require?

Strand or solid core cable will be fine. There is a minimum and maximum gauge of wire that is required so that it can operate as an induction loop.
See table below. (see loop hearing amplifier PLN-1LA10)

Balanced connections employ two conductors, each of which carries the same signal but with the polarity of one reversed with respect to the other. (eg. a microphone connection). The chief advantage of the balanced line format is good rejection of external noise. Balanced lines reduce the amount of noise over distance, allowing a longer cable run. This is because electromagnetic interference will affect both signals the same way. Similarities between the two signals are automatically removed at the end of the transmission path when one signal is subtracted from the other.

(Background Music). Music or program source which is played at a lower volume that allows conversation. An approx level for BGM would not normally exceed 65dB. Applications include restaurants, retail shops, etc.

Originally a measuring system developed and used by the telecommunications industry, referring to one-tenth of a Bel. Most commonly it is used in audio practices to represent a ratio between two different audio levels. It is important to note that the decibel is not an absolute number, but always refers to a ratio of two numbers. It is used so extensively because it is very easy to represent both very small and very large changes in relative levels. Because it is merely a ratio, a decibel alone has no units, and always must be related to some reference point, which is designated by a letter following the 'dB' indication. 0 dBu is a voltage reference point equal to 0.775V rms.

Refers to a measure of the difference between the output and input signals in a linear component, such as an amplifier.

An undesirable, audible effect, usually due to the overloading of one or more components of the PA system.

(Foreground music). Loud projected program source or performance audio from a band or group that is the focus of an audience. Usual applications are performance venue areas such as theatres, auditoriums and nightclubs.

A phenomenon where the sound from a loudspeaker is picked up by the microphone or other transducer, and is reproduced through a loudspeaker only to return to the same microphone to be reproduced. Each time the signal becomes larger until the systems runs away and rings, or feedback occurs producing the characteristic scream or squeal. These feedback loops often occur at particular frequencies. (see LBB-1986/00 feedback suppressor)

The amount an electronic circuit amplifies the original signal.

(Gain Before Feedback). The maximum gain a PA can generate towards a microphone before feedback occurs.

An audio circuit, in which an external processing device (such as a compressor, noise gate or equaliser) can be added to the signal chain within a device.

A 2 digit number used to provide an Ingress Protection rating to a piece of electronic equipment against (most commonly) dust and water.

Line level is a term used to denote the strength of an audio signal used to transmit analogue sound between audio components such as CD and DVD players. It is a higher signal strength than a microphone signal level. 25

The electrical level (voltage) of signal generated by a microphone; a microphone level may be around 2 mV.

Is a method for transmitting DC electric power through microphone cables to operate microphones that contain active electronic circuitry.

An input that is of a higher importance and will override other inputs in an audio system.

A shield is a conductive enclosure that protects against electromagnetic fields. In audio, unwanted EMF fields can create unwanted noise in audio circuits, usually found as a hum or a buzz. Most commonly, a cable shield consisting of a braided copper strands wrapped around the actual audio signal conductors; other shield. Those found in installation cable consist of a wrap of foil encircling the inner conductors. Audio enclosures usually use some form of metal enclosure that is connected to ground.

Sound level is a logarithmic measure of the effective pressure of a sound relative to a reference value. It is measured in decibels (dB) above a standard reference level. The commonly used 'zero' reference sound pressure in air is 20 ÂµPa RMS, which is usually considered the threshold of human hearing (at 1kHz).

Speaker tapping is the method by which a speaker's power can be reduced, so that more speakers can be placed on a given power amplifier channel.

A mode where by an input is activated in the presence of an audio signal.

A term that describes a group of loudspeakers in an area that outputs always the same source.